Colombia is synonymous with coffee. Unfortunately for Colombia, so are Ethiopia, Brazil, Vietnam, Mexico, Indonesia, and the rest of the 39 major coffee-producing countries on Earth. Colombia can’t claim largest coffee exporter (it’s 3rd) but it can distinguish itself as the 2nd largest exporter of arabica beans. In other words, Colombia produces the most of the best coffee after the behemoth Brazil. Though, what sucks for some Colombian coffee growers, is that no matter how wonderful the coffee they produce is, they’re stuck selling at shockingly low rates.

Adam and I spent a couple weeks at La Victoria, a 126-year old organic coffee farm and beneficio nestled in the Sierra Nevadas, a 2 hour hike from the town of Minca. Among tough competition and a commodity pricing model, we wondered how La Victoria could survive. As temporary resident tour-guides, we learned were part of the solution. Tourism.

Six years ago, the family that owns and operates La Victoria turned to tourism to supplement the downward spiral of earnings from wholesale exports alone. They are forced to sell their delicious, organic, history-steeped arabica beans for what feels like nothing — a rate determined by a formula that’s fixed to the Intercontinental Exchange in New York’s arabica bean commodity price.

One morning as we sipped one of many cups of luxuriously fresh La Victoria coffee, Claudia, the owner, converted the current figure if her head. A 50-kilo sack of green (aka pre-roasted) coffee beans would fetch about $120 USD from their wholesaler. Their coffee ends up all over the world, and American coffee shops represent about 44% of Colombia coffee exports, the single largest destination. I still remember buying coffee at home, bags of organic roasted beans, or worse, brewed cups from a cafe… the numbers don’t make sense. One pound of wholesale raw bean organic coffee sells for $1.50 at these rates. In San Francisco, a one pound bag of roasted beans retails for $15, a 1000% increase. How does this happen?

First, there’s the basic economics of supply and demand. When it comes to coffee, supply from those 43+ countries is plenty to satisfy the demand. Special thanks to Brazil. Then there’s the climate change debacle making the coffee business riskier everywhere. In La Victoria’s case, the wacky climate patterns caused their coffee cherries to ripen early this year, setting the stage for a low-yield season, which equates to several tons less than last year, another low year. (A million other factors also contribute as well, I’m sure.)

Despite the doom and gloom, there could be a promising future for Colom-bean coffee and La Victoria. La Federación Nacional de Cafeteros de Colombia, or FNC, has been around for over 90 years working to secure better prices for coffee growers in Colombia. In 2018, these growers included an estimated 560,000 families. A few months ago the head of the FNC said, “current international coffee prices of around $1.15 per pound are an embarrassment.” I’m glad we all agree. Though, I don’t know what they have up their sleeves to fight this.

Perhaps most promisingly, there’s the growing taste for specialty coffee to consider. Tastes are changing throughout the world and it’s a palpable change in Colombia. They have been on top of the coffee supply world for awhile, but ever tried Colombian’s traditional brew, tinto? It’s watery black coffee with heaps of sugar — more like a tea than any coffee I know. Coffee consumption sophistication only just arrived.

Lately, Juan Valdez and Tostao are two speciality coffee chains popularizing a different breed of coffee and turning more and more Colombians into coffee snobs. Many have already graduated another notch to so-called third wave coffee shops, places like Cultivar Cafe in Filandia (pictured above and the second-best cup of coffee from the past 14 months after Saffron’s in Luang Prabang.) Both the Juan Valdezes and the Cultivars epitomize the local demand’s fight for quality coffee in an era where ridiculously good, organic arabica coffee from a 126-year old farm is subject to commodity benchmarks. Many of the 560,000 family farms in Colombia don’t have the resources to turn to tourism to turn a profit to survive, so something has to give. After 7 weeks in Colombia and an embarrassing amount of coffee, I did my little part to support Colombia’s coffee industry. Bottoms up. 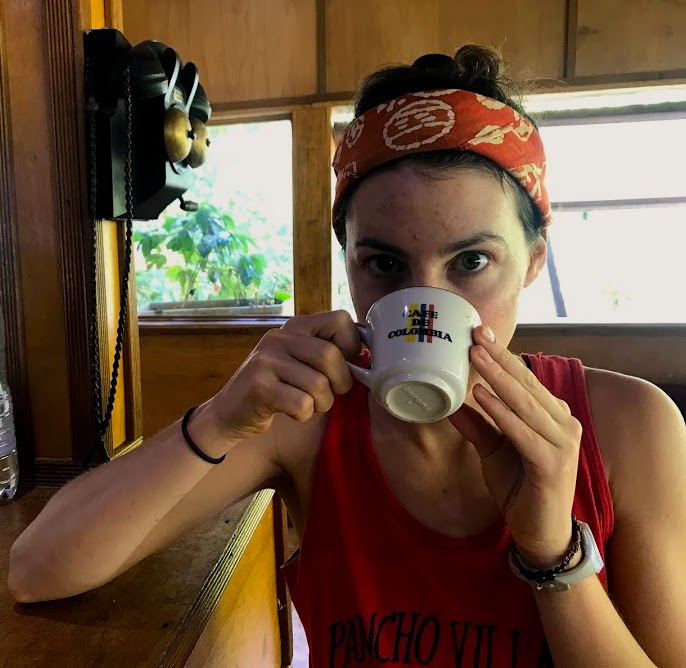 One thought on “What’s in a Cup of Colombian Coffee?”

As of August 2017, I traded a comfortable and wonderful San Francisco existence for adventure through Asia, Oceana and South America with just a backpack and my boyfriend, Adam.